Nnamdi Kanu reveals what the Chinese, imported by Umahi are doing in Biafralands

May 9, 2020 imported by Umahi are doing in Biafralands, Nnamdi Kanu reveals what the Chinese 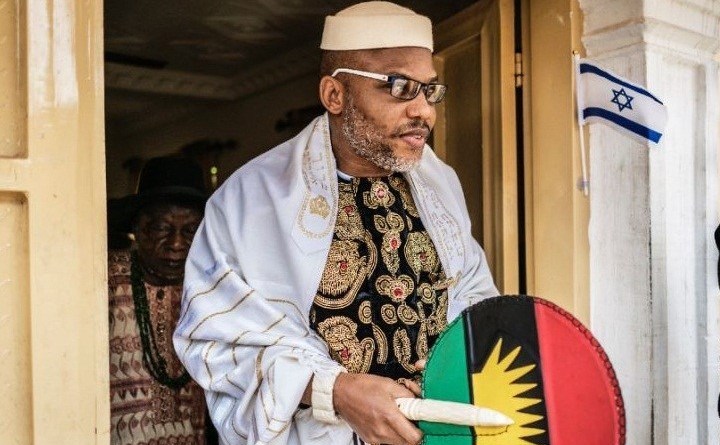 The leader of the Indigenous People of Biafra IPOB, Mazi Nnamdi Kanu has revealed what the Chinese people allegedly imported by Governor Dave Umahi are doing in Biafralands.

Kanu claimed that these Chinese are stripping the region of their valuable mineral resources.

Read the message below;

There are those who out of ignorance or foolishness or both, constantly and divisively refer to a portion of Biafraland as oil-rich Niger Delta to be excised from the rest of Biafra for the benefit of One Nigeria. Some of these deluded fools from the #ZooNigeria, especially their newscasters, commentators, newspaper feature writers and columnists from Yorubaland, supported by their wretched pipeline guarding counterparts in the lugubriously named Niger Delta region often claim the yearning for Biafra has something to do with Igbos wanting their oil or “Oil” as they prefer to call it. What a shame! How daft and unknowledgeable these morons truly are.

These bands of idiots often forget that every square inch of Igboland is full of oil, gas, and highly sought after precious minerals including rare earth. Igboland is the only place on the planet where coal, oil, gas, and highly sought after minerals occur side by side. Name the state in the South East that hasn’t got oil. Shell is in Egbema. Agip is in Ohaji. Shell is in Ugwuta and Ukwa. Orient oil is in Agulueri/Umueri. Addax Oil is in Awomama and Izombe. Ohaji has the largest in-use gas field in Africa piped to the coast and shipped to world markets.

The video below is the largest oil field in West Africa located in Nsukka, yes Nsukka.

The second video shows what the dreaded Chinese, brought in by Gov. Dave Umahi, are doing to our land by stripping it of valuable mineral resources not found anywhere else in Africa apart from Congo.

If oil and gas or mineral deposits are the main reason why we are agitating for Biafra, then it would have been more prudent to abandon everybody else and seek a homogeneous Igbo nation. But the fact is that BLOOD is thicker than OIL. All Biafrans are one people and we are leaving the Zoo at the same time. Our greatest natural resource is our God-given ingenuity and intelligence, not something located under the ground.