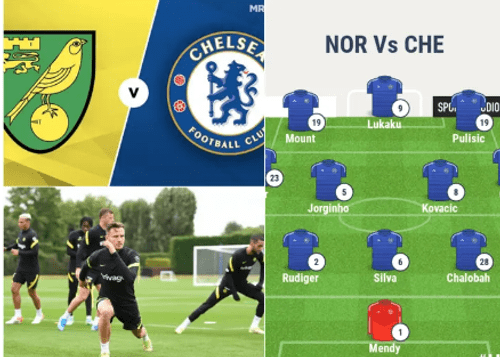 English Premier League giant Chelsea football club is set to make a short trip to Carrow Road where they will face Norwich City in the Premier League on Thursday night. The game is one of the Blue’s standing games. Chelsea missed the game by playing the Carabao Cup finals, so it was rescheduled, and they are now set to play.

Thomas Tuchel and his men will be desperate to maintain their winning streak after beating Burnley 4-0 at the Turf Moor Stadium during the weekend. Chelsea is16 points behind Manchester City and 10 points behind Liverpool who currently sits second in the league. The title race is currently out of reach, but the Blues could close more gaps. Azpilicueta has returned to training but will not be rushed to play against Norwich. Marcos Alonso is still out after testing positive for Covid-19. Hudson Odoi could return to the starting lineup as well as Romelu Lukaku.

Norwich, on the other hand, will welcome Ozan Kabak to the squad after recovering from injury, while Jonathan Rowe, an academy graduate, could be handed his first Premier League start. Romelu Lukaku could return to the starting lineup, while Pulisic and Mount may start from the left and right-winning respectively. Kickoff time: The game will kick off at exactly 8:30 pm at Carrow Road.