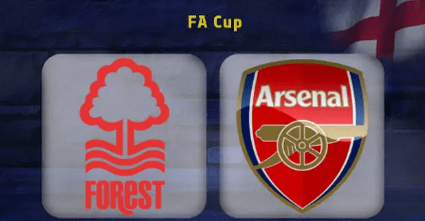 Arsenal Coach, Mikel Arteta has officially released lineup of players who will take on Nottingham Forest in the FA Cup matches.

The English Premier League giants Arsenal will be hoping to get a comfortable victory when they travel away to face Championship side Nottingham Forest in the FA Cup.

The recent performances of Arsenal shows why they may claim a famous away victory at City Ground.

In their last five matches in all competitions, The North London based club Arsenal recorded four wins and one loss. The Gunners scored fourteen goals while they conceded five goals to their opponent.

In the last meeting between both sides, the Gunners got an emphatic 5 – 0 win over Nottingham Forest in the Carabao cup.

The Spanish and Arsenal head coach Mikel Arteta would be hoping to get a good result in order to give them a huge chance of winning the FA cup title this season.

The Arsenal tactician is also expected to name a strong line up for their crucial cup match against Nottingham Forest.

The German and Arsenal goalkeeper Bernd Leno is expected to be in between the sticks for their crucial cup match against Nottingham Forest.

The duo of Rob Holding and Callum Chambers are expected to start in the center-back position.

The Arsenal tactician Mikel Arteta is expected to include Nuno Tavares and Ainsley Maitland-Niles in the starting line up for their crucial cup match against Nottingham Forest.

The Experienced Arsenal midfielder Granit Xhaka is expected to retain his place in the central midfield position and will feature alongside Albert Sambi Lokonga.

The Brazilian attacker Gabriel Martinelli will operate in the left wing position while Bukayo Saka is also expected to feature in the right wing position.