Nottm vs ARS: Mikel Arteta apologise to fans over 1-0 loss to Nottingham Forest 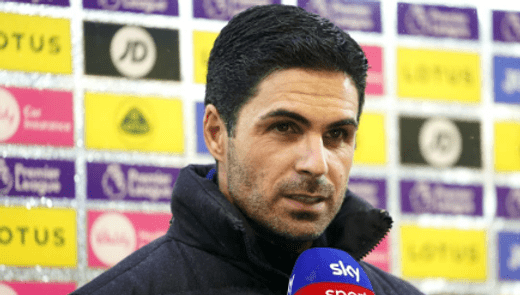 Although, The Gunners appeared to have turned a corner of late but were lacklustre against Emirates FA Cup opponents.

According to Mikel Arteta, he said;

“We were not good enough and we have to apologise for it.

“We needed more drive, more hunger to win at any cost in every single action, much more. We were not at our level.

“I’m really disappointed with the performance, first of all. Not with the attitude but how much purpose we have and what determination we showed to change the game when it’s difficult to play against the way they play.

“I have played in games like that for the past 18 years and I know how complicated it is to come here. It’s no surprise the difficulties you are going to face. But when we do that, we have to face it in a different way.

“It is really hurting. It is a competition that is very related to our history and to get out of it is a big bump.”

EPL: What Mikel Arteta said after Arsenal win 5-0 against Norwich

Forest, resurgent under manager Steve Cooper, can now look forward to an East Midlands derby and another meeting with a Premier League side, holders Leicester City, in the fourth round.

The Championship side, who beat the Gunners 4-2 at the same stage in 2018 and have not lost a home tie in six years, were physical from the start.

Cooper was delighted with his side’s battling display, the latest in a series of impressive performances since he took charge in September.

“I think we deserved to win,” he said. “We came up against a really good team. We had a clear game plan. We wanted to be brave with our pressing and get at them on the counter and that’s how we scored.

“I’m really proud of the boys, pleased with the performance. It’s brilliant to get through and I hope the players now really believe in what we’re doing.”

Arteta’s frustration was illustrated when he substituted left-back Nuno Tavares – whose performance was summed up by a wild back pass that visiting keeper Bernd Leno had to chest away from goal – for Kieran Tierney after 34 minutes.

But with eight minutes left, substitute Grabban met Yates’ cross to condemn Arsenal to another third-round exit in the East Midlands.

Arsenal had been warned of the threat Forest posed from crosses early in the second half, but they didn’t learn and paid the price on a miserable night for Arteta’s men.They were unlucky against Premier League leaders Manchester City on New Year’s Day but failed to show any of the same application here.

Meanwhile, In the Emirates FA Cup record winners have lost only twice in the third round since 1996 – and both times were at the hands of Nottingham Forest.