PDP Kick Off Governorship Campaign In Ondo, Vows To Win 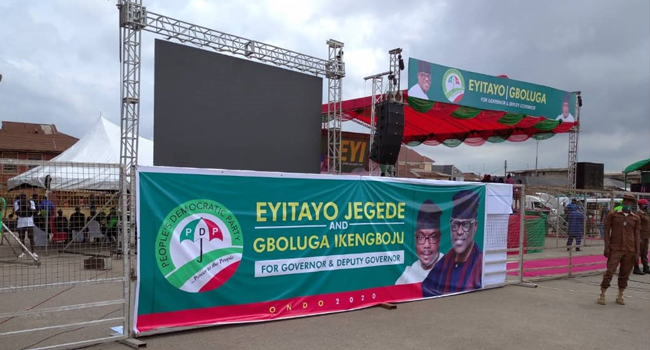 PDP- The Peoples Democratic Party (PDP) on Saturday as the party prepared to kick start its governorship campaign for the November 10 election, at the MKO Abiola Democracy Park in Akure, the Ondo state capital, were several political paraphernalia and supporters are present. 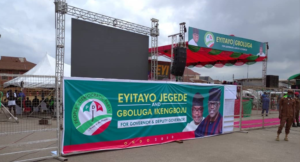 The venue is being manned by security operatives, including men of the Nigeria Police Force and Nigeria Security and Civil Defence Corps (NSCDC).

The PDP’s candidate for the election is Eyitayo Jegede.

The party was expected to flag off its campaign last Saturday but, instead, party leaders met in Oyo to strengthen its campaign strategy.

The All Progressives Congress, the party of incumbent Governor Rotimi Akeredolu, who is also seeking re-election, flagged off its campaign on September 5.

Some of the dignitaries already present at the PDP flag-off include the Senator representing Ekiti South, Abiodun Olujimi, and the PDP State Chairman, Fatai Adams.

Representing Vice President Atiku Abubakar at the flag off is Segun Sowunmi.

Other dignitaries are still being expected to arrive at the venue.

The Chairman of the PDP governorship campaign committee, Oyo State Governor, Seyi Makinde is expected to lead other PDP governors and Committee members to the rally.

Also expected is the National Chairman of the PDP, Uche Secondus, and other members of the National  Executive Council.

Jegede and his running mate Gboluga Ikengboju will be kicking off their statewide campaign from the Park, continuing to all the 18 local government councils of the state.