May 8, 2020 See what happen as a homeless woman gave birth on the street of Lekki 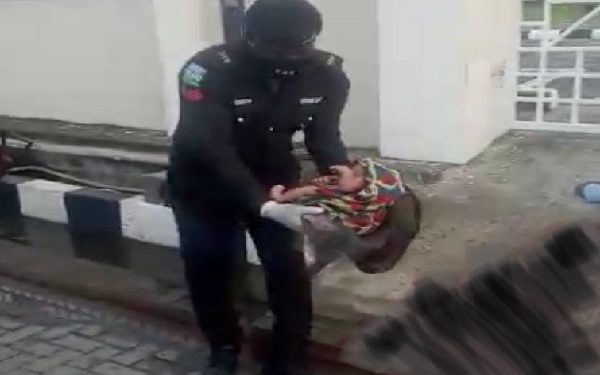 At early hours of Friday morning a homeless woman was rescued by the Lagos State Rapid Response Squad (RRS) why giving birth on the street of Lekki, Lagos.

At about 7 am in the morning, the woman who’s name was identified as Mrs Deborah was seen giving birth in front of House on the Rock Church, Lekki.

It was gathered that woman was with her four other young children when she started having labour pains.

It was learnt that the woman was bleeding which attracted the attention of passersby including two medical doctors who stopped to assist her.

According to a source, an RRS patrol vehicle was notified about the incident and the operatives raced to the scene to help rush the woman to the hospital.

Upon arrival, the cops, it was gathered, took the woman to Eti-Osa Primary Health Centre (PHC) at Ikate-Elegushi Town where treatment commenced immediately.

Findings by the police revealed that the woman was homeless and had no husband.

“She is a homeless mother of four. She doesn’t have a husband. We are just happy that both mother and child are safe. They were taken to the PHC for medical attention.

“The two doctors accompanied the patrol team to the hospital. People rallied round to give clothes and procure some baby materials for the woman.

“We just hope that government and good spirited individuals can help the woman and those children to be out of the street,” said a source.