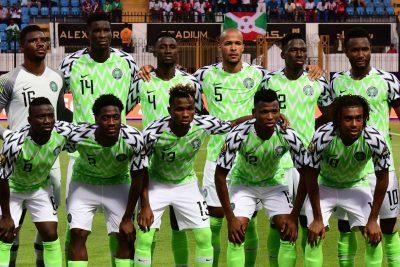 An early Ramy Bensebaini goal was all the Desert Foxes needed to secure a back-to-back victory over the Super Eagles in an international friendly March at the Worthersee Stadium in Austria.

The reigning African champions defeated Nigeria 2-1 in Egypt last year on their way to picking up their second continental crown and made it two wins in two thanks to Bensebaini’s sixth minute poke in.

Nigeria didn’t deal well with an Algerian corner kick and the fullback slammed home from close range after the ball fell kindly to him.

Gernot Rohr handed Porto fullback Zaidu Sanusi and Midtjylland midfield trojan Frank Onyeka their Super Eagles debut but it was not enough as Nigeria suffered a narrow loss to Algeria on Friday night.

Algeria dominated most of the early possession, dictating play and winning several corner kicks but the Super Eagles grew into the game with Sanusi and Genk’s Paul Onuachu showing neat touches.

The introduction of Kelechi Iheanacho, Ahmed Musa and Simon Moses in the second half failed to inspire the Nigerian attack to produce the equalizer.

The defeat is Nigeria’s first since losing to the same opponent at the semifinals of the African Cup of Nations in Egypt last year.

Nigeria had claimed victory over Tunisia, Lesotho, and the Benin Republic while earning credible draws against Brazil and Ukraine.