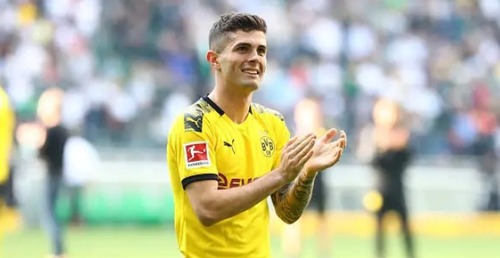 According to reports, The he 24-year-old Chelsea player would like to return to his former club but would have to accept a significant wage cut.

According to reports in Germany, Christian Pulisic of Chelsea would love to return to Borussia Dortmund.

According to BILD, the American would have to take a significant pay cut to return to the Bundesliga side.

From a personal standpoint, things have not gone as planned for Pulisic.

He has struggled to establish himself as a starter at Stamford Bridge, and with Thomas Tuchel reportedly not trusting him with consecutive starts, he may have been among those relieved to see a new manager arrive.

However, little has changed for the 24-year-old, who is reportedly unsure of his future at Chelsea.

BILD has stated that he would welcome a return to Dortmund, the club from which he joined Chelsea.

Pulisic would welcome a return to Dortmund. His stock will undoubtedly rise following an impressive World Cup debut.
The American dominated the draw against England, giving his country a strong chance of reaching the knockout stages of the competition.

He then scored the game-winning goal against Iran, and he is now sweating on his own fitness in order to return to the team when they face the Netherlands on Saturday.

This tournament has demonstrated that he still has a role to play at Stamford Bridge, especially given the club’s current crop of attackers’ underperformance.

The Blues are unlikely to sign any top-tier forwards in January, which means that any of the current squad members can stake their claim to Graham Potter as a must-starter.