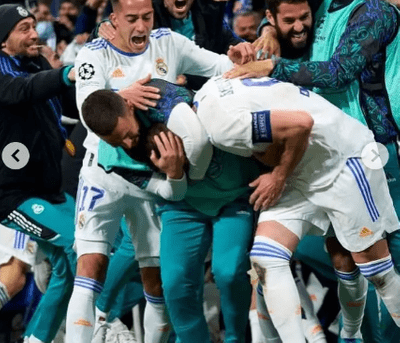 Real Madrid booked their place in the next stage of the UEFA champions league competition after a thrilling second half performance at the Santiago Bernabeu last night against Paris Saint-Germain.

The home side was losing by a single goal scored by Kylian Mbappe and seem to be heading for the exit but a second half performance inspired by a Karim Benzema hatrick turned the tie around. Report: 2 Reasons why Eden Hazard may not joined Chelsea if he leaves Real Madrid

The French striker sent everyone at the stadium into oblivion with those three goals, on scoring his third goal of the game, he ran straight to Eden Hazard who was sitting on the bench and the two hugged themselves in celebration. The Former Chelsea talisman was an unused substitute in the game as the coach preferred the likes of Marco Asensio and Vinicius Junior.