‘The power tussle has no good proceeds to the ruling party in Edo State, See why

Jun 7, 2020 'The power tussle has no good proceeds to the ruling party in Edo State, See why 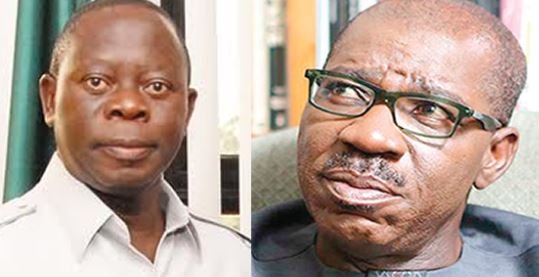 The National Chairman of the All Congressive Congress, APC, Comrade Adams Oshiohmole, and his successor Governor Godwin Obaseki, in every ramification the power tussle has no good proceeds to the ruling party the APC.

Comrade Adams Oshiohmole has sworn not to allow Governor Godwin Obaseki to return as a Governor in Edo State which to many may spell doom for the APC faithful in the State.

As an Elder Statesman the role expected of the National Party Chairman, Adams Oshiohmole is to embrace peace whiles the look to maintain their grip of the State of Edo with Unity and oneness then people can see an act of good leadership qualities from a man that has held the position of the Labour group of the great country Nigeria.

The current Governor Obaseki has been able to show that the days of Godfatherism in Nigeria politics is a thing of the past. There has to be freedom to all in respect to the rule of Law in every dimension of our political leaders from all cranes and corner of Nigeria.

The recent insecurity ongoing in Edo State is a sign that all is not well because many political pundits would believe that its either coming from both big wings camp which no one can underestimate based on the attacks on Adams Oshiohmole residence and all the troubles characterizing the administration of Godwin Obaseki in recent times.

“For how long shall we continue to play politics with critical matters that require urgent attention from all Stake Holders in Edo State. The best advice for both men is to put down their egoistic nature which is ever-present in every living and work towards the betterment of the Edo People who should be put first and not the selfish interest of who controls and run the State.”

Anarchy is looming in the State of Edo is proper political calculation is not put in place for the people that gave the mantle of leadership to both men controlling from Abuja and on-ground in Edo State.

The implications would be that the opposition party would come after both past Governors and we all know what that means as both men can not say they are free from some corrupt practices which have been on the lips of the opposition in the State.

In conclusion, Adams Oshiohmole should play the role of a father and burry the past for the interest of his party and that of entire Edo People which is where the second-ever city of the world is located the great Benin City.