‘The Viral Video Over S3xual Harassment Under Investigation- says, IGP(Video) 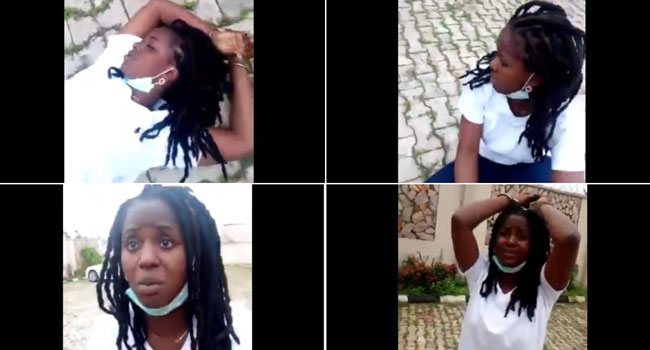 The investigation is on by the Nigeria Police over the viral video that trending on social media showing a policeman interrogating a female suspect and asking her inappropriate questions of an s3xual nature.

The Inspector-General of Police has ordered an immediate investigation into the circumstances surrounding the dehumanizing treatment meted out to the female citizen in the viral video.

The tweet thread further reads: “The IGP, while condemning the act, has directed the commencement of comprehensive investigations aimed at unraveling the true identity of the perpetrators with a view to bringing them to justice.

“Members of the public are hereby assured that any member of the Force found culpable in the incident will be made to face appropriate sanctions.”

In the video, one could hear the officer interrogating a young lady named Towobola, following a raid at the apartment of an alleged kidnapper.

According to the officer who spoke in Yoruba, the young lady was to answer for how she got to know the kidnapper who she claimed to have met only recently.

After whisking the kidnap suspect away, the officers placed Towobola in handcuff and went on to harass her verbally for ‘sleeping with a criminal’.

The interrogation degenerated into very lewd seeming dialogues, with questions ranging from if the suspect is a virgin to how many people she had slept with.

Meanwhile, The video went viral on social media, why some tweets calling for the immediate dismissal of the officers, arguing that their conducts were unprofessional and of human abuse.

This is harassment by the Ibadan arm of the Nigerian Police. Even if she’s guilty what sort of questions and harassment is this? @kikimordi @ozzyetomi @StandtoEndRape pic.twitter.com/aeB9kvfMBL

This is harassment by the Ibadan arm of the Nigerian Police. Even if she’s guilty what sort of questions and harassment is this? @kikimordi @ozzyetomi @StandtoEndRape pic.twitter.com/aeB9kvfMBL