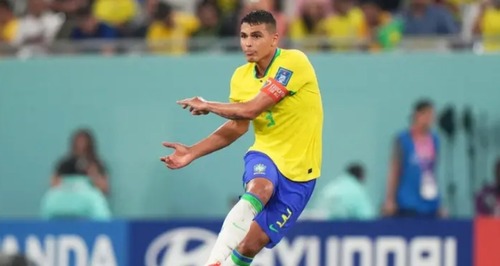 Thiago Silva, Raheem Sterling, Mason Mount, and Conor Gallagher have returned to Chelsea training in preparation for the return of the Premier League.

After Brazil and England were eliminated in the World Cup quarterfinals, the quartet took a week off before returning to Cobham on Sunday morning.

Silva, Mount, Sterling, and Gallagher will be available for selection when Chelsea returns to Premier League action on December 27 against Bournemouth.

Brazil captain Silva suffered World Cup heartbreak as the Selecao was eliminated on penalties by Croatia. Mount and Sterling were late replacements in England’s loss to France.

When the domestic season resumes, Chelsea will be in a crunch situation.

The Blues have lost four of their last five matches leading up to the World Cup, putting them in danger of missing out on Champions League qualification.

Mateo Kovacic and Hakim Ziyech are expected to return to Cobham late next week after competing in Saturday’s World Cup third/fourth-place play-off in Qatar.

Graham Potter hopes to welcome back Reece James and Wesley Fofana this month after long absences.

When Ben Chilwell, N’Golo Kante, and Kepa Arrizabalaga will be able to play again is unknown.