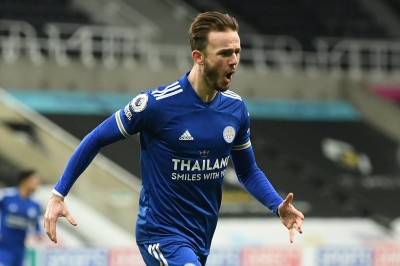 Leicester City midfielder, James Maddison, has been on the transfer news deal, as Arsenal take it as a priority to signed at the Emirates.

However, Foxes said, is not under any pressure to sell Maddison as he still has contract until 2024 based on speculation.

Meanwhile, Leicester deal worth require bid in excess of £78.3 million, it’s not having no intention to sell it midfielder, James Maddison.

Although, Arsenal is ready to signed James Maddison still have £70 million to get the midfielder at Emirates if they all agreed.

Another player in focus, was Martin Odegaard, a Real Madrid player, which Arsenal is in need of in its squad in this new season if transfer market fees agreed.

The Norway International Midfielder, and the second half of last season on loan at Emirates, but has since returned to Real Madrid to fight for his first term place in the club.

Arsenal may need players to sell to raise funds to move in the transfer market in search of key players in the squad.

According to reports, Chelsea striker, Tammy Abraham bid signed as he is preparing to join Arsenal’s other players at Emirates on a loan move.

No doubt, Ben White, which bid worth £50 million from Brighton, it is at the edge of completion as the transfer transfer window stage is on, which will be completed in the coming days.

Due to report, it is understood that Arsenal may need also to transfer some of his own players before making a move to sign key players into the squad like James Maddison, Martin Odegaard, Tammy Abraham, Ben White and others yet to bid for as the transfer is still opened.