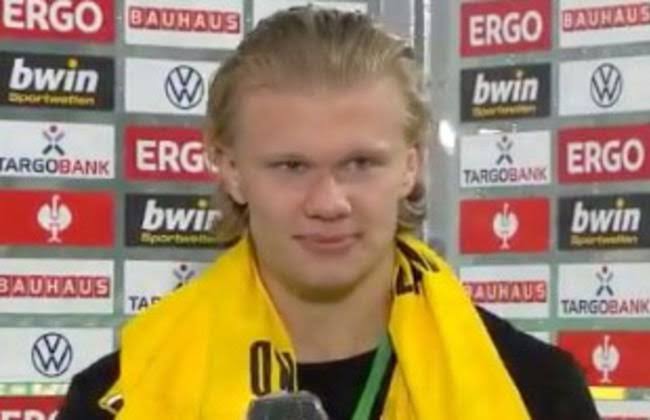 The Borussia Dortmund striker, Erling Haaland spoke at his team’s training camp about Chelsea’s interest in acquiring his services at Stamford Bridge.

According to Borussia Dortmund’s striker, hopes “It’s just rumours, £175 million is a lot of money.”

The Borussia Dortmund striker is wanted by several top clubs especially Chelsea and Manchester United in their squad. Despite reports that he is Hindi Blues orbit, the striker wanted to respond with a message that brings a smile to the face of Dortmund’s fans.

“I haven’t spoken to any agent for month now, since on Monday. But, the link hearing about this rumours from you, I just believe, it’s just rumours, because the money is too much to spend for person (£175 million).”

The Norwegian International striker, Haaland, understands that he still have work to do with Dortmund.

“First of all, I have three years contract left. I’m enjoying my time here. But of course winning is the most important thing that is what I want.” said the striker.

He, however, said, at the Borussia Dortmund training camp, where he is playing alongside with Donyell Malen. The Dutchman will replace Jadon Sancho, has started trained with his new teammates.