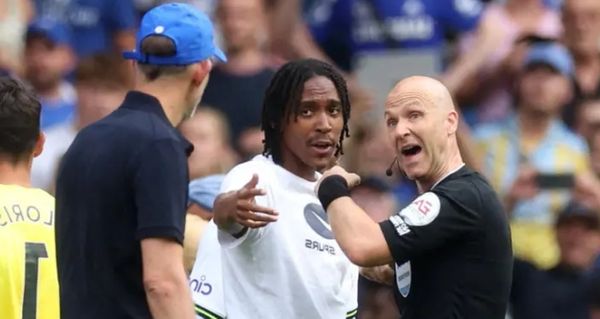 The Football Association, FA has begin to investigate, Chelsea’s Boss, Thomas Tuchel has he rant about Anthony Taylor in yesterday’s game against Tottenham, after claimed Cucurrella’s hair draw during the match that leads to Spurs 2-2 draw, to suggest the referee is biased against Chelsea..

Thomas Tuchel, when interview, speaks on who to blame as Tottenham equalised against Chelsea through a corner kick, as Cucurrella’s hair was drawn by Tottenham player which the referee claimed not see.

The Stamford Bridge boss slated both Spurs’ “ridiculous” equalisers in Sunday’s fiery 2-2 draw and insisted all his players worry about Taylor’s officiating.

Anthony Taylor responds to Chelsea manager Thomas Tuchel ranting st him, who could be in hot water over a later outburst over the referee.

Football chiefs will look into Tuchel’s apparent claim that Taylor is biased – especially as the German doubled down on his criticism and recommended the ref no longer takes charge of Chelsea games.

Tuchel, when asked about the supporters’ feelings, he said:

“I don’t think that just some of the fans think that. I can assure you that the whole dressing room of us, every person thinks that.

“Not only the fans. You know the players, they know what’s going on when they are on the pitch. They know it.”

And he repeated the suggestion that his squad doubt Taylor by saying:

BREAKING: Chelsea striker said goodbye to teammates as he returned back to Serie A

Meanwhile, both the two PL clubs giant, Tuchel and Conte will get one-game touchline bans for being sent off at the end of the controversial clash.