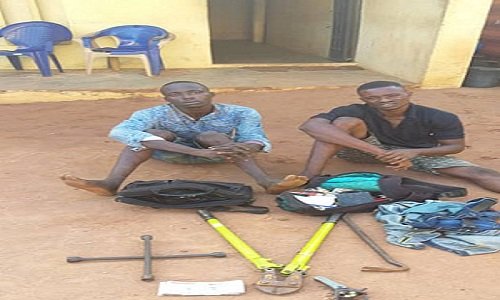 Two armed robbery suspects are known as Ogbonna Chigozie, 18, and Chimezie Afulor, 33, arrested in Anambra by the Nigeria Police while attempting to beat border post in the state.

The suspects were intercepted on a tricycle with a locally-made pistol among other tools.

Haruna Mohammed, the Police spokesperson, confirmed their arrest, saying the suspects were arrested by operatives while enforcing the COVID-19 curfew.

According to Commissioner of Police, John Abang has ordered the immediate transfer of the case to the Command Special Anti Robbery Squad (SARS) for discreet investigation.

He said, “Suspects were immediately searched and the following exhibits found in their possession: one locally-made pistol with four rounds of live ammunition, one tricycle, house-breaking implements, and N31,720 cash.

“Preliminary investigation revealed that the suspects allegedly snatched the tricycle from Nkpor and were trying to cross to Akokwa in Imo State before their arrest.”