Jun 4, 2020 Video showing how a white police officer kneeling on a black man in Florida 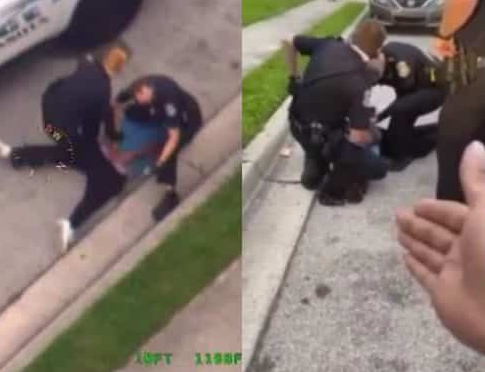 A Florida police department has launched an internal investigation after a video surfaced on social media showing a Sarasota police officer kneeling on a black man’s neck during an arrest.

In the nearly 90-second cellphone video taken by a bystander during the May 18 incident, three officers can be seen attempting to take a male individual into custody. One of the two officers is then seen kneeling on the head and neck of the man.

The man, who was arrested on a domestic violence/battery charge, is heard yelling, “Why am I being arrested?” as the officer kneels on him.

“As I’m yelling, and asking, ‘Why am I being detained,’ he started putting his knee on my neck,” Patrick Carroll said in an interview with CNN affiliate WFTS.

Carroll said he suffers from asthma and scoliosis, and he was having trouble breathing.

“While he’s saying I’m resisting, I’m just moving around so I can have circulation in my body and my throat,” he said.

In the cellphone video taken by a bystander during the May 18th incident, two officers were filmed attempting to take him into custody in an aggressive manner. At one point, one of the two officers is then seen kneeling on the head and neck of the man after they pinned him down to the ground.

A third officer later came to the scene to help his two other colleagues to take the man into custody.

The video surfaced in the wake of the ongoing protest over George Floyd’s death, which an independent autopsy attributed to officers kneeling on him during his arrest.

In the police incident report obtained by CNN, one of the officers involved says that after they placed Carroll in handcuffs, the “defendant attempted to pull away from officers and refused to get into the rear of the patrol vehicle. The minor force was used to escort subject to the ground and secure him long enough for him to calm down.”

The Sarasota Police Department said in a statement released Tuesday they didn’t learn about the video until Monday when the department was tagged in a social media post showing a portion of the arrest. After a review of several videos, Chief Bernadette DiPino immediately initiated a formal internal affairs investigation, the department said.

The officer, who knelt on the man during his arrest has been placed on administrative leave.

“We are bound and determined to do everything we can to build, rebuild and repair the relationships that were damaged in reference to what’s going on in our community right now as it relates to this particular video,” Robinson said.