We’re all in the system, ‘It is dog-eat-dog- Magu allege 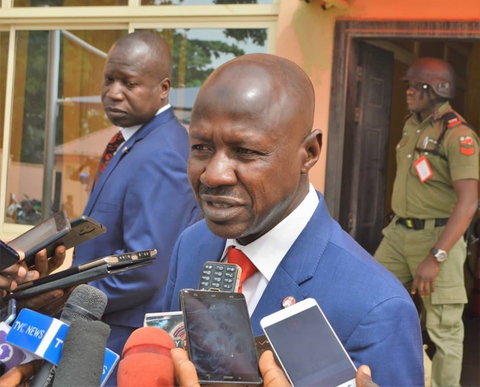 Ibrahim Magu, The suspended Acting Chairman of Economic and Financial Crimes Commission, EFCC, who was released on bail, on self-recognition, on the directive of the presidential panel investigating corruption allegations against him, has said that the allegations were fabricated and his detention a case of dog-eat-dog.

Magu said this, on Wednesday, when he was released that the job of the Anti-graft is a risky job of fighting against corrupt persons.

He urged Nigerians not to give up on the fight, saying President Muhammadu Buhari must be supported to eradicate corruption in the country.

He said: “They should not be discouraged. I am happy to be back, I believe the war against corruption is winnable. They should not give up on the fight because corruption kills a nation faster than any other thing.

“It is not a personal fight. Whether I am EFCC Chairman or not, the anti-corruption war must continue.” On the allegations against him, he said: “The allegations are merely trumped-up allegations to tarnish my image and that of the EFCC. I did not steal or divert or convert funds to private use.

I read the allegations and I was shocked.” His lawyer, Mr. Tosin Ojaomo, on Wednesday night, confirmed that his client, who is facing corruption charges had been released.

The lawyer, however, said it was illegal for the Mr. Magu to have been detained at the Force Criminal Investigations Department, FCID, for 10 days in the first place.

Mr. Ojaomo claimed that nothing incriminating was found in Magu’s house by investigators sent by the panel, noting that reports in the media of huge sums of money discovered were mere fabrications.

He said Mr. Magu does not sign for money or cheques in EFCC and so he cannot be seen to be keeping such an alleged amount of money at home.

Speaking on Channels TV program, ‘Politics Today’, Ojaomo stated that if the Justice Ayo Salami panel eventually finds Mr. Magu not culpable of the allegations against him, Magu should be reinstated by President Muhammadu Buhari. Vanguard