WORLD CUP 2022: Nigeria draw alongside with Australia, Canada, and France in Group B 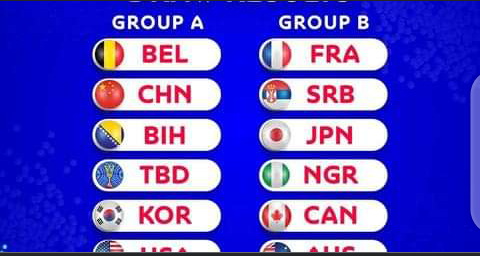 Nigeria have been draw alongside with Australia, Canada, and France in the FIBA Women’s Basketball World Cup 2022, as the D’Tigress of Nigeria is fully set to win the FIBA this 2022.

D’Tigress of Nigeria have been drawn against France, Australia, Canada, Japan and Serbia in Group B of the 2022 FIBA Women’s Basketball World Cup.

Following FIBA’s decision on Russian teams, the draw results features a team “To Be Determined” (TBD) team. FIBA’s Central Board will decide in due course which team from the Washington/Santo Domingo Qualifying Tournament will participate in the Women’s World Cup.

Belgium, China, Bosnia and Herzegovina, South Korea, United States and To Be Determined” (TBD) team are in group A.

Four teams from each of the two groups will advance to the quarter-finals.

The 19th edition of FIBA ‘s premier international tournament for women’s national basketball teams, will be held in Sydney , Australia between 22 September and 1 October 2022.